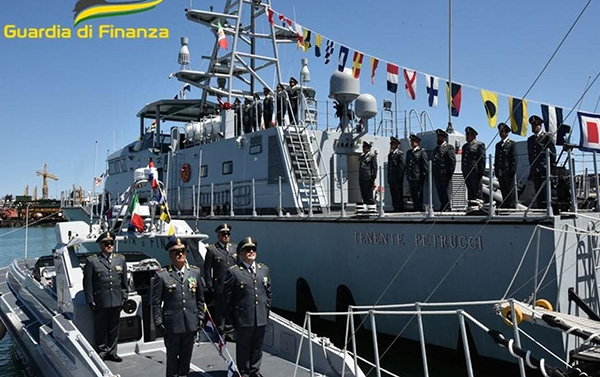 Two new modern patrol boats, the V.8000 interceptor and the fast RHIB V.1301, were presented at the Aeronaval Operational Department (ROAN) of Bari. Both will enter service immediately.
In the “Raffaele Vitiello” barracks in the Apulian capital, headquarters of the Naval Station of the Guardia di Finanza of Bari, the ceremony for the delivery of the patrol boats and the delivery of the naval flag to the fast patrol vessel P.V. 10 “Lieutenant Petrucci” took place. The ceremony was also attended by the General Commander of the GdF, Giuseppe Zaffarana, together with the local civil and military authorities.
The General Commander specified that: “The Corps is undergoing a process of modernization of its air-naval fleet, aimed at ensuring that it is possible to operate with the maximum possible efficiency in contrasting illegal trafficking, from the trafficking of illegal immigrants to arrest smugglers and save human lives at sea up to the more traditional illicit trafficking, especially drug trafficking and the smuggling of foreign manufactured tobacco”.
All the new patrol boatspresented are equipped with the radio and the ELMAN W-AIS, as well as with the ELMAN communications centralization system naVIS.
ELMAN is proud to contribute with its state-of-the-art systems to the valuable work done at sea by the Guardia di Finanza .
PrevPreviousTraining courses for Coast Guard personnel
NextWhen electronics are artNext